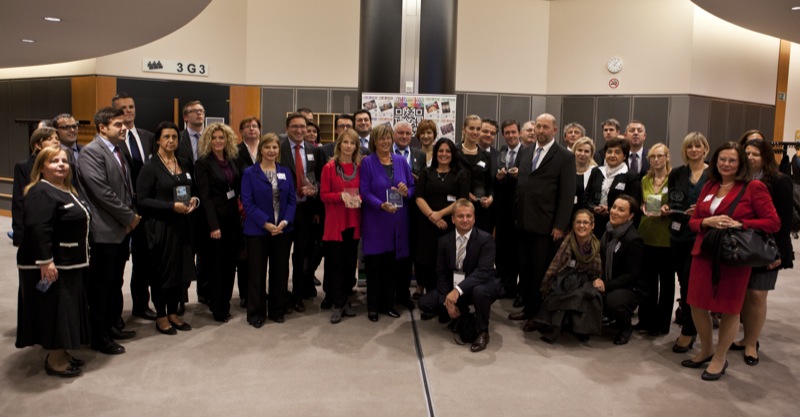 The beneficiary countries of the IPA funds 2007-2013 were divided into two categories, depending on their status as either candidate countries under the accession process or potential candidates under the stabilization and association process, namely:

Aside from the traditional Awards campaign, during this edition EPA also rewarded actors who, during the period 2007-2013, had an influence and played a relevant role in the field of Regional and Local Development.

The Awarding Ceremony of the European Projects Awards IPA 2013 took place the 7th October at the European Parliament, in the framework of EPA Conference 2013 on Perspectives of territorial cooperation 2014-2020 - Expectations after Croatian Accession. This conference had a specific focus on the changes in cooperation that the accession of the Republic of Croatia to the European Union was bringing to the table

The event was introduced by the EPA Secretary General, Ms. Katarina Sipic and by Mr. Marino Baldini, Croatian Member of the European Parliament for the Progressive Alliance of Socialists and Democrats Group and Member of the Committee on Economic and Monetary Affairs who stressed the importance of regional and territorial cooperation in all the sectors of the EU economy and society.

At the roundtable participated also:

Mrs. Mercedes BRESSO, the Vice President of the Committee of the Regions

Mr. Valter FLEGO, the President of the Region of Istria

Mr. Predrag STROMAR, the President of the Varazdin Region

Mr. Franco Iacop, the President of the Regional Council of the Autonomus Region of Friuli Venezia Giulia

Mr Miroslav Matesic, Deputy Mayor of the City of RIjeka

Mr. Dino Elezovic, the Representative of the Kanton of Sarajevo

From 350 showcased projects, 43 funded by IPA were evaluated by the largest on line community of European projects experts: www.my-europa.eu.

Honourable guests of the Conference that handed in the EPA Award were Mr. Robert Van Es, Magistrate at Gwent Judicial District in UK, Mrs. Roberta Mancia, Lawyer and Professor at the European Academy for Education and Social Research and Mrs. Dragica Martinovic Director of the Representative Office of Croatian Chamber of Economy and the Representative of the European Economic and Social Committee.